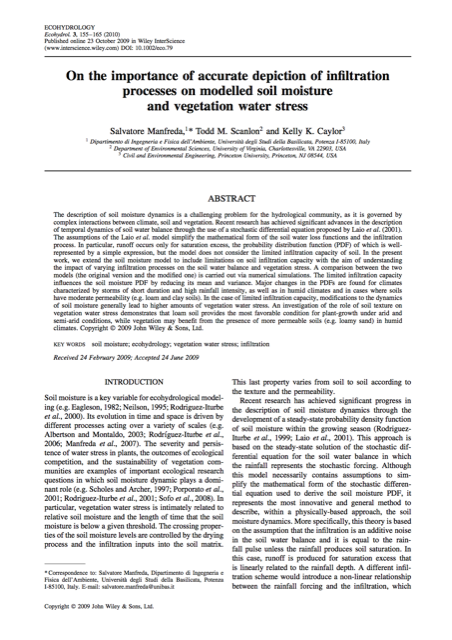 The description of soil moisture dynamics is a challenging problem for the hydrological community, as it is governed by complex interactions between climate, soil and vegetation. Recent research has achieved significant advances in the description of temporal dynamics of soil water balance through the use of a stochastic differential equation proposed by Laio et al. (2001). The assumptions of the Laio et al. model simplify the mathematical form of the soil water loss functions and the infiltration process. In particular, runoff occurs only for saturation excess, the probability distribution function (PDF) of which is well- represented by a simple expression, but the model does not consider the limited infiltration capacity of soil. In the present work, we extend the soil moisture model to include limitations on soil infiltration capacity with the aim of understanding the impact of varying infiltration processes on the soil water balance and vegetation stress. A comparison between the two models (the original version and the modified one) is carried out via numerical simulations. The limited infiltration capacity influences the soil moisture PDF by reducing its mean and variance. Major changes in the PDFs are found for climates characterized by storms of short duration and high rainfall intensity, as well as in humid climates and in cases where soils have moderate permeability (e.g. loam and clay soils). In the case of limited infiltration capacity, modifications to the dynamics of soil moisture generally lead to higher amounts of vegetation water stress. An investigation of the role of soil texture on vegetation water stress demonstrates that loam soil provides the most favorable condition for plant-growth under arid and semi-arid conditions, while vegetation may benefit from the presence of more permeable soils (e.g. loamy sand) in humid climates.