An article written by Lixin Wang has been published in Geochimica et Cosmochimica Acta. The article explores how the soil warming experiment conducted by Yiai Luo at the University of Oklahoma has altered the partitioning of evapotranspiration. Group members Stephen Good and Keir Soderberg are co-authors of the work.

Lixin’s efforts demonstrate for the first time that it is feasible to use coupled chamber-laser instrument method to quantify the isotopic compositions of evapotranspiration, dET, as well as both its end members: transpiration, dT, and evaporation, dE. The chamber method works well for dT and dET estimates, based on agreement between the Keeling plot and mass balance approaches. The chamber method may not always be success- ful for estimating dE, especially when evaporation is very low. Because of the capability of field deployment and in situ measurements, the coupled chamber-laser instrument method can provide an improved capacity to quantify ET partitioning over a range of scenarios, offering a means of describing this important biophysical response.

We observed no change in dT and dET, but there was a significant decrease in the isotopic composition of soil liquid water and dE under the warming treatment. These changes are likely caused by the higher vegetation cover and lower litter cover under the warming treatment, although neither of these variables was significantly different. The Craig–Gordon model calculations under two scenarios indicate that warming induced decrease in soil water isotopic composition is the major factor responsible for the observed dE trend and warming-induced changes in a play an insignificant role. 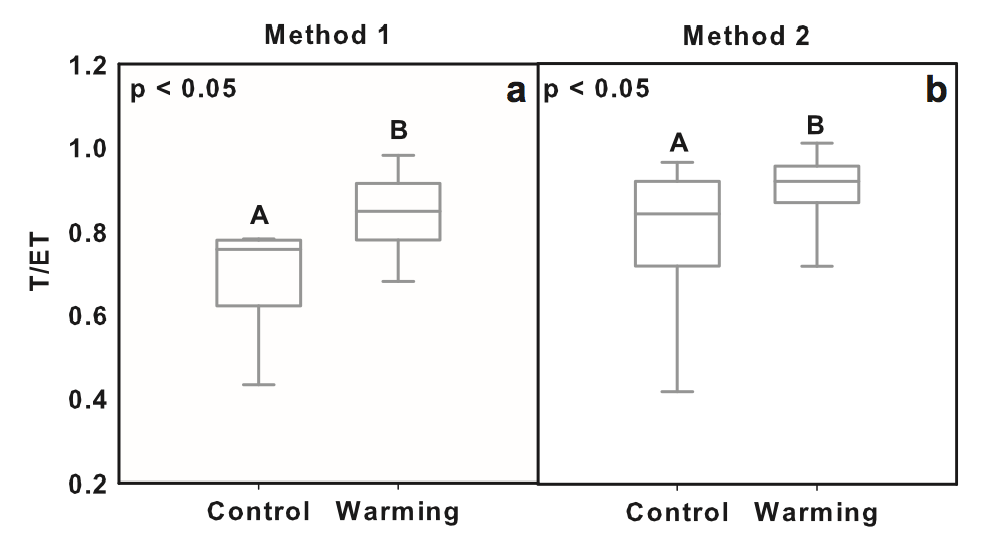 The results showed an increase in the T/ET ratio for the warming treatments compared to the control treatments. We found the ratio of T/ ET in the control treatment was about 0.65 or 0.77 and the ratio found in the warming treatment was about 0.83 or 0.86, based on the different methods employed. Based on the observed ET, E and dE values, we argue that the increased T/ET ratio under warming is caused mainly by re- duced E, with minimal change in ET and T. We also found a positive relationship between T/ET ratio and vegetation cover combining the control and warming treatments. These results suggest a positive feedback of biological effects on hydrological cycles under warming scenarios and may provide valuable information for constraining model predictions of future change.