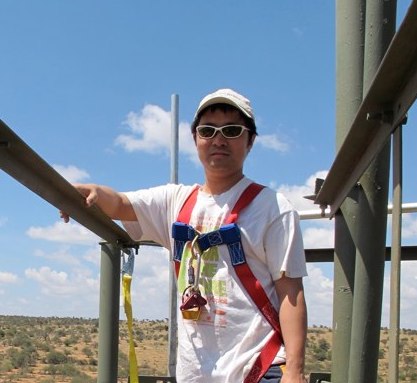 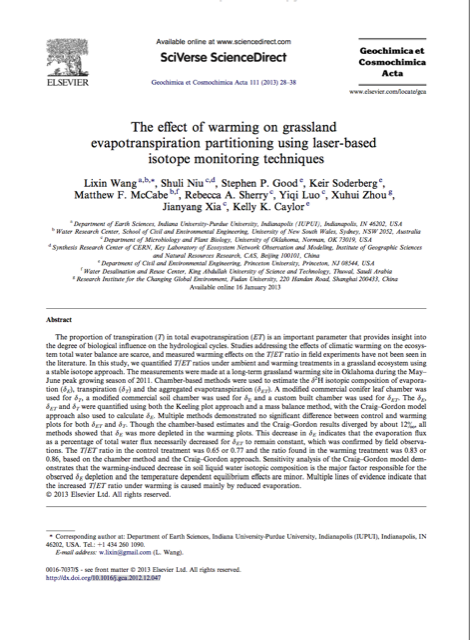 The proportion of transpiration (T) in total evapotranspiration (ET) is an important parameter that provides insight into the degree of biological influence on the hydrological cycles. Studies addressing the effects of climatic warming on the ecosys- tem total water balance are scarce, and measured warming effects on the T/ET ratio in field experiments have not been seen in the literature. In this study, we quantified T/ET ratios under ambient and warming treatments in a grassland ecosystem using a stable isotope approach. The measurements were made at a long-term grassland warming site in Oklahoma during the May– June peak growing season of 2011. Chamber-based methods were used to estimate the d2H isotopic composition of evapora- tion (dE), transpiration (dT) and the aggregated evapotranspiration (dET). A modified commercial conifer leaf chamber was used for dT, a modified commercial soil chamber was used for dE and a custom built chamber was used for dET. The dE, dET and dT were quantified using both the Keeling plot approach and a mass balance method, with the Craig–Gordon model approach also used to calculate dE. Multiple methods demonstrated no significant difference between control and warming plots for both dET and dT. Though the chamber-based estimates and the Craig–Gordon results diverged by about 12&, all methods showed that dE was more depleted in the warming plots. This decrease in dE indicates that the evaporation flux as a percentage of total water flux necessarily decreased for dET to remain constant, which was confirmed by field observa- tions. The T/ET ratio in the control treatment was 0.65 or 0.77 and the ratio found in the warming treatment was 0.83 or 0.86, based on the chamber method and the Craig–Gordon approach. Sensitivity analysis of the Craig–Gordon model dem- onstrates that the warming-induced decrease in soil liquid water isotopic composition is the major factor responsible for the observed dE depletion and the temperature dependent equilibrium effects are minor. Multiple lines of evidence indicate that the increased T/ET ratio under warming is caused mainly by reduced evaporation.