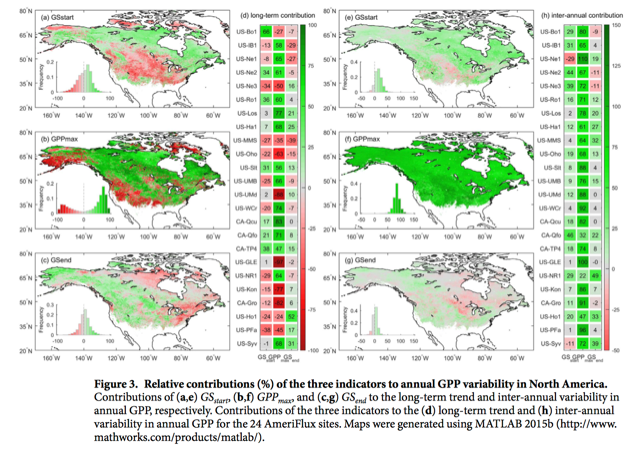 Abstract: Annual gross primary productivity (GPP) varies considerably due to climate-induced changes in plant phenology and physiology. However, the relative importance of plant phenology and physiology on annual GPP variation is not clear. In this study, a Statistical Model of Integrated Phenology and Physiology (SMIPP) was used to evaluate the relative contributions of maximum daily GPP (GPP(max)) and the start and end of growing season (GS(start) and GS(end)) to annual GPP variability, using a regional GPP product in North America during 2000-2014 and GPP data from 24 AmeriFlux sites. Climatic sensitivity of the three indicators was assessed to investigate the climate impacts on plant phenology and physiology. The SMIPP can explain 98% of inter-annual variability of GPP over mid-and high latitudes in North America. The long-term trend and inter-annual variability of GPP are dominated by GPP(max) both at the ecosystem and regional scales. During warmer spring and autumn, GS(start) is advanced and GSend delayed, respectively. GPP(max) responds positively to summer temperature over high latitudes (40-80 degrees N), but negatively in mid-latitudes (25-40 degrees N). This study demonstrates that plant physiology, rather than phenology, plays a dominant role in annual GPP variability, indicating more attention should be paid to physiological change under futher climate change.