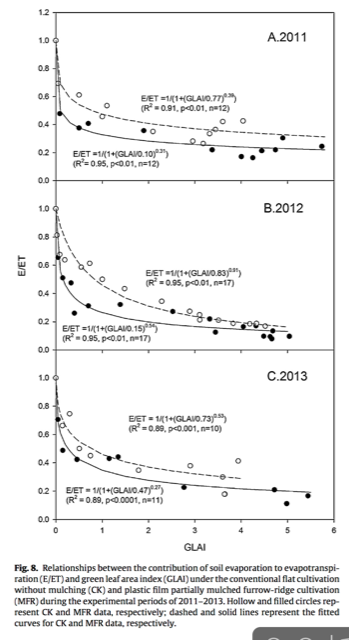 Abstract: The ratio of evaporation to evapotranspiration (E/ET) and crop coefficients (K-c) are important parameters for evaluating the water-saving potentials of agronomic technologies and they may vary with different practices of dryland cultivation. This study synchronously investigated changes of E/ET and IQ for three years using two eddy covariance systems and multi-microlysimeters under two cultivation methods-conventional flat planting without mulching (CK) and a furrow-ridge system with plastic film partially mulching (MFR)-on the semiarid Loess Plateau of China. Due to an increase of vapor diffusion resistance at the soil-air interface partially mulched by plastic film, the average E and ET of MFR Were lower than those of CK by 38.1% and 9.3%, respectively, for the three growing seasons. Thus, the average E/ET in MFR decreased by 11.2 percentage points compared with CK. E/ET showed a significant logistic function with the green leaf area index (GLAI) under both treatments during the three growing seasons. The seasonal IQ varied with GLAI following a step function curve for both treatments, and was linearly correlated to GLAI with significance levels when GLAI was below the thresholds of 3.0 and 3.2-3.4 for CK and MFR, respectively. Maximum IQ values were 1.01 +/- 0.05 and 0.91 +/- 0.09 for CK and MFR, respectively, at the middle crop growth stage. These results suggest that MFR can significantly reduce E/ET and maximum IQ, which help to improve yield and water use efficiency in rainfed spring maize fields. Consequently, MFR enhanced the average grain yield and crop water use efficiency by 12.5% and 24.6%, which amounted to 11527 kg/ha and 3.36 kg/m(3), respectively. Therefore, MFR promoted crop water productivity and is an effective approach to solve water crises in dryland regions.