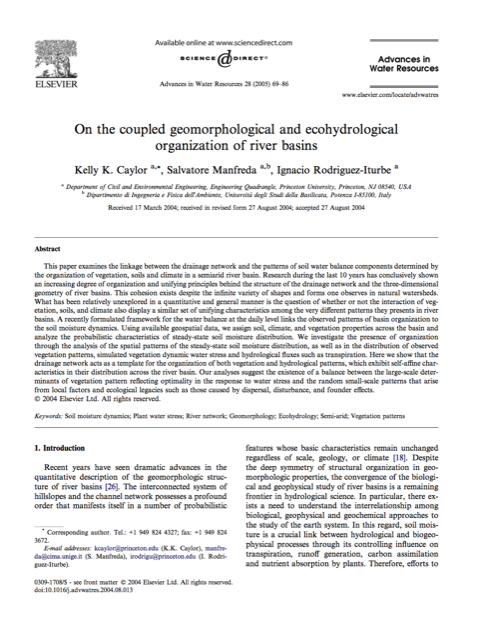 Caylor, K.K., S. Manfreda, I. Rodriguez-Iturbe (2005) “On the coupled geomorphological and ecohydrological organization of river basins.” Advances in Water Resources, 28(1):69-86.

This paper examines the linkage between the drainage network and the patterns of soil water balance components determined by the organization of vegetation, soils and climate in a semiarid river basin. Research during the last 10 years has conclusively shown an increasing degree of organization and unifying principles behind the structure of the drainage network and the three-dimensional geometry of river basins. This cohesion exists despite the infinite variety of shapes and forms one observes in natural watersheds. What has been relatively unexplored in a quantitative and general manner is the question of whether or not the interaction of vegetation, soils, and climate also display a similar set of unifying characteristics among the very different patterns they presents in river basins.

A recently formulated framework for the water balance at the daily level links the observed patterns of basin organization to the soil moisture dynamics. Using available geospatial data, we assign soil, climate, and vegetation properties across the basin and analyze the probabilistic characteristics of steady-state soil moisture distribution. We investigate the presence of organization through the analysis of the spatial patterns of the steady-state soil moisture distribution, as well as in the distribution of observed vegetation patterns, simulated vegetation dynamic water stress and hydrological fluxes such as transpiration. Here we show that the drainage network acts as a template for the organization of both vegetation and hydrological patterns, which exhibit self-affine characteristics in their distribution across the river basin.

Our analyses suggest the existence of a balance between the large-scale determinants of vegetation pattern reflecting optimality in the response to water stress and the random small-scale patterns that arise from local factors and ecological legacies such as those caused by dispersal, disturbance, and founder effects.