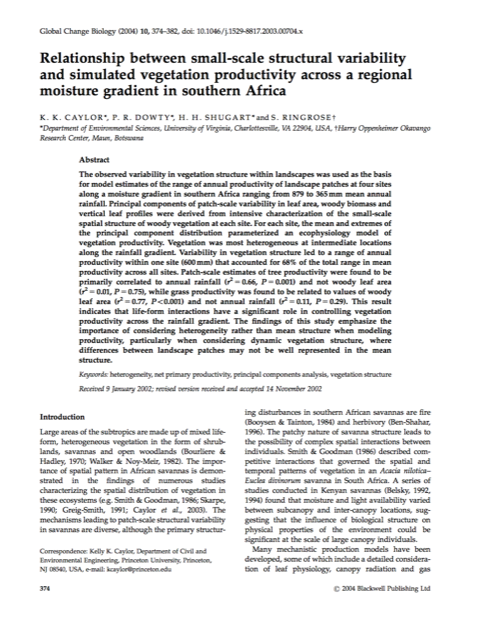 The observed variability in vegetation structure within landscapes was used as the basis for model estimates of the range of annual productivity of landscape patches at four sites along a moisture gradient in southern Africa ranging from 879 to 365 mm mean annual rainfall. Principal components of patch-scale variability in leaf area, woody biomass and vertical leaf profiles were derived from intensive characterization of the small-scale spatial structure of woody vegetation at each site. For each site, the mean and extremes of the principal component distribution parameterized an ecophysiology model of vegetation productivity. Vegetation was most heterogeneous at intermediate locations along the rainfall gradient.

Variability in vegetation structure led to a range of annual productivity within one site (600 mm) that accounted for 68% of the total range in mean productivity across all sites. Patch-scale estimates of tree productivity were found to be primarily correlated to annual rainfall (r(2)=0.66, P=0.001) and not woody leaf area (r(2)=0.01, P=0.75), while grass productivity was found to be related to values of woody leaf area (r(2)=0.77, P<0.001) and not annual rainfall (r(2)=0.11, P=0.29). This result indicates that life-form interactions have a significant role in controlling vegetation productivity across the rainfall gradient. The findings of this study emphasize the importance of considering heterogeneity rather than mean structure when modeling productivity, particularly when considering dynamic vegetation structure, where differences between landscape patches may not be well represented in the mean structure.