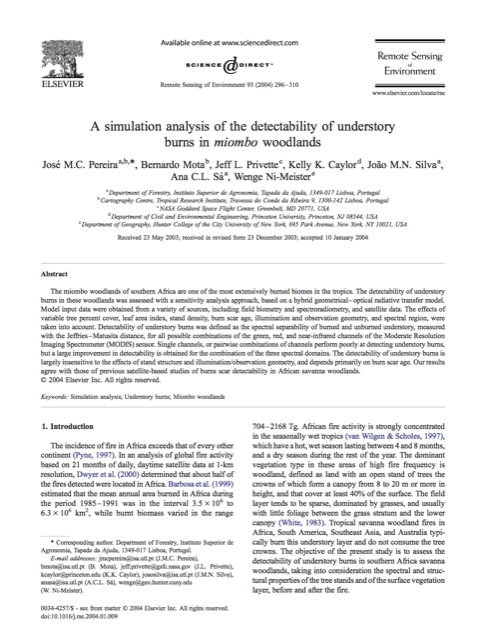 The miombo woodlands of southern Africa are one of the most extensively burned biomes in the tropics. The detectability of understory bums in these woodlands was assessed with a sensitivity analysis approach, based on a hybrid geometrical-optical radiative transfer model. Model input data were obtained from a variety of sources, including field biometry and spectroradiometry, and satellite data. The effects of variable tree percent cover, leaf area index, stand density, bum scar age, illumination and observation geometry, and spectral region, were taken into account.

Detectability of understory bums was defined as the spectral separability of burned and unburned understory, measured with the Jeffries-Matusita distance, for all possible combinations of the green, red, and near-infrared channels of the Moderate Resolution Imaging Spectrometer (MODIS) sensor. Single channels, or pairwise combinations of channels perform poorly at detecting understory bums, but a large improvement in detectability is obtained for the combination of the three spectral domains.

The detectability of understory bums is largely insensitive to the effects of stand structure and illumination/observation geometry, and depends primarily on bum scar age. Our results agree with those of previous satellite-based studies of bums scar detectability in African savanna woodlands.