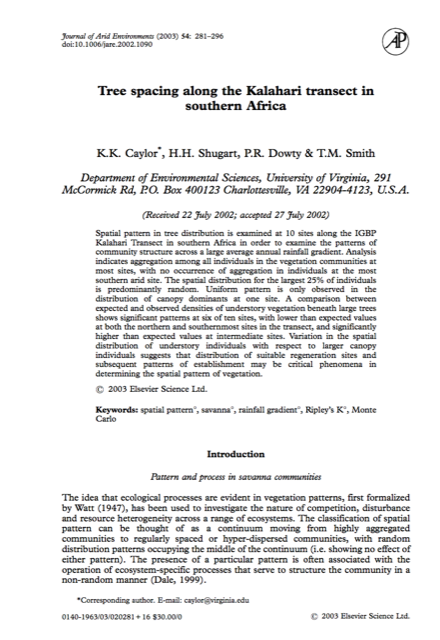 Spatial pattern in tree distribution is examined at 10 sites along the IGBP Kalahari Transect in southern Africa in order to examine the patterns of community structure across a large average annual rainfall gradient. Analysis indicates aggregation among all individuals in the vegetation communities at most sites; with-no occurrence of aggregation in individuals at the most southern arid site: The spatial distribution for the largest 25% of individuals is predominantly random. Uniform pattern is only observed in the distribution, of canopy dominants at one site.

A comparison between expected and observed densities of understory vegetation beneath large trees shows significant patterns at six of ten sites, with lower than expected values at both the northern and southernmost sites in the transect, and significantly higher than expected values at intermediate sites. Variation in the spatial distribution of understory individuals with respect to – larger canopy individuals suggests that distribution of suitable regeneration sites and. subsequent patterns of establishment may be critical phenomena in determining the spatial pattern of vegetation.