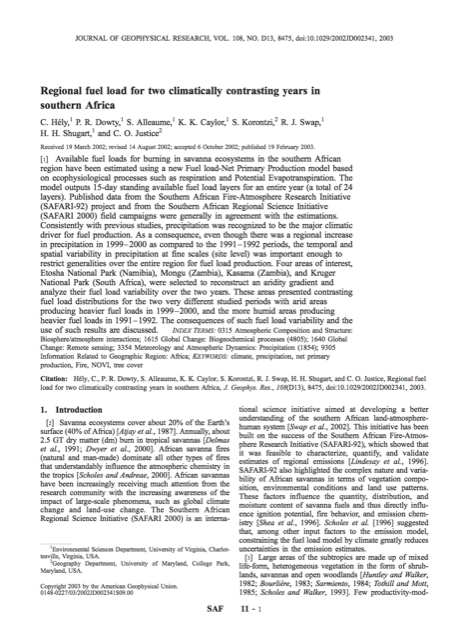 Available fuel loads for burning in savanna ecosystems in the southern African region have been estimated using a new Fuel load-Net Primary Production model based on ecophysiological processes such as respiration and Potential Evapotranspiration. The model outputs 15-day standing available fuel load layers for an entire year (a total of 24 layers). Published data from the Southern African Fire-Atmosphere Research Initiative (SAFARI-92) project and from the Southern African Regional Science Initiative (SAFARI 2000) field campaigns were generally in agreement with the estimations.

Consistent with previous studies, precipitation was recognized to be the major climatic driver for fuel production. As a consequence, even though there was a regional increase in precipitation in 1999-2000 as compared to the 1991-1992 periods, the temporal and spatial variability in precipitation at fine scales (site level) was important enough to restrict generalities over the entire region for fuel load production. Four areas of interest, Etosha National Park (Namibia), Mongu (Zambia), Kasama (Zambia), and Kruger National Park (South Africa), were selected to reconstruct an aridity gradient and analyze their fuel load variability over the two years. These areas presented contrasting fuel load distributions for the two very different studied periods with arid areas producing heavier fuel loads in 1999-2000, and the more humid areas producing heavier fuel loads in 1991-1992. The consequences of such fuel load variability and the use of such results are discussed.