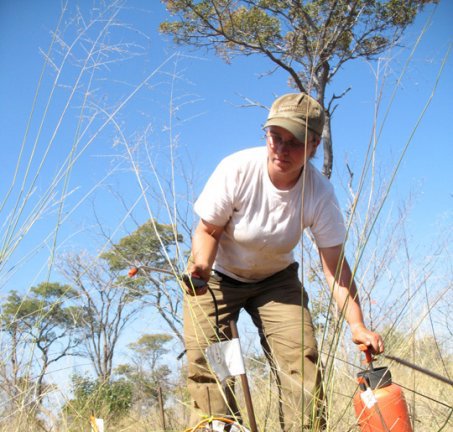 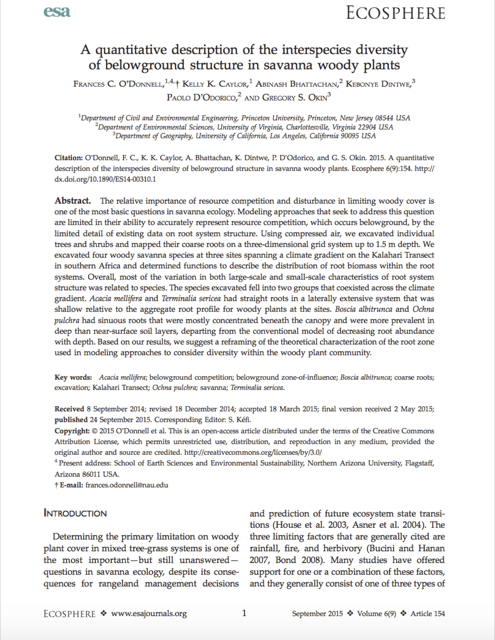 The relative importance of resource competition and disturbance in limiting woody cover is one of the most basic questions in savanna ecology. Modeling approaches that seek to address this question are limited in their ability to accurately represent resource competition, which occurs belowground, by the limited detail of existing data on root system structure. Using compressed air, we excavated individual trees and shrubs and mapped their coarse roots on a three-dimensional grid system up to 1.5 m depth. We excavated four woody savanna species at three sites spanning a climate gradient on the Kalahari Transect in southern Africa and determined functions to describe the distribution of root biomass within the root systems. Overall, most of the variation in both large-scale and small-scale characteristics of root system structure was related to species. The species excavated fell into two groups that coexisted across the climate gradient. Acacia mellifera and Terminalia sericea had straight roots in a laterally extensive system that was shallow relative to the aggregate root profile for woody plants at the sites. Boscia albitrunca and Ochna pulchra had sinuous roots that were mostly concentrated beneath the canopy and were more prevalent in deep than near-surface soil layers, departing from the conventional model of decreasing root abundance with depth. Based on our results, we suggest a reframing of the theoretical characterization of the root zone used in modeling approaches to consider diversity within the woody plant community.