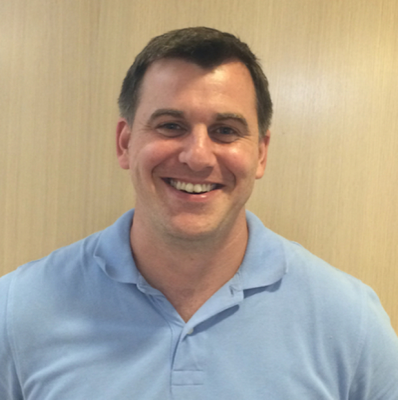 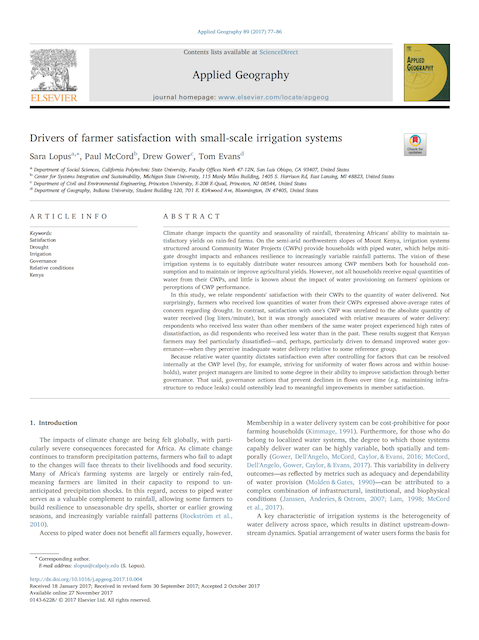 Abstract:Climate change impacts the quantity and seasonality of rainfall, threatening Africans’ ability to maintain satisfactory yields on rain-fed farms. On the semi-arid northwestern slopes of Mount Kenya, irrigation systems structured around Community Water Projects (CWPs) provide households with piped water, which helps mitigate drought impacts and enhances resilience to increasingly variable rainfall patterns. The vision of these irrigation systems is to equitably distribute water resources among CWP members both for household consumption and to maintain or improve agricultural yields. However, not all households receive equal quantities of water from their CWPs, and little is known about the impact of water provisioning on farmers’ opinions or perceptions of CWP performance.

In this study, we relate respondents’ satisfaction with their CWPs to the quantity of water delivered. Not surprisingly, farmers who received low quantities of water from their CWPs expressed above-average rates of concern regarding drought. In contrast, satisfaction with one’s CWP was unrelated to the absolute quantity of water received (log liters/minute), but it was strongly associated with relative measures of water delivery: respondents who received less water than other members of the same water project experienced high rates of dissatisfaction, as did respondents who received less water than in the past. These results suggest that Kenyan farmers may feel particularly dissatisfied—and, perhaps, particularly driven to demand improved water governance—when they perceive inadequate water delivery relative to some reference group.

Because relative water quantity dictates satisfaction even after controlling for factors that can be resolved internally at the CWP level (by, for example, striving for uniformity of water flows across and within households), water project managers are limited to some degree in their ability to improve satisfaction through better governance. That said, governance actions that prevent declines in flows over time (e.g. maintaining infrastructure to reduce leaks) could ostensibly lead to meaningful improvements in member satisfaction.