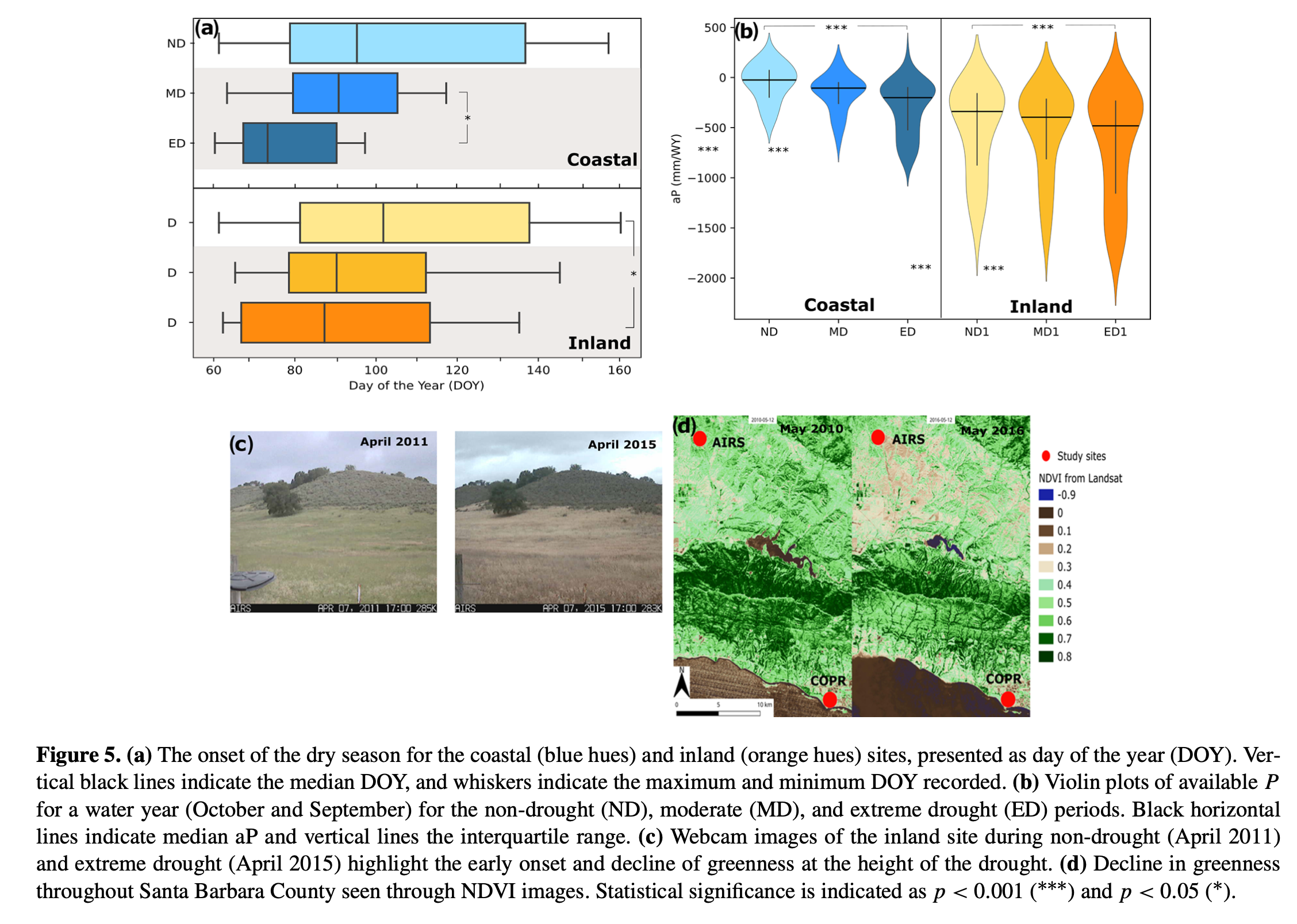 Abstract:Despite clear signals of regional impacts of the recent severe drought in California, e.g., within Californian Central Valley groundwater storage and Sierra Nevada forests, our understanding of how this drought affected soil moisture and vegetation responses in lowland grasslands is limited. In order to better understand the resulting vulnerability of these landscapes to fire and ecosystem degradation, we aimed to generalize drought-induced changes in subsurface soil moisture and to explore its effects within grassland ecosystems of Southern California. We used a highresolution in situ dataset of climate and soil moisture from two grassland sites (coastal and inland), alongside greenness (Normalized Difference Vegetation Index) data from Landsat imagery, to explore drought dynamics in environments with similar precipitation but contrasting evaporative demand over the period 2008–2019. We show that negative impacts of prolonged precipitation deficits on vegetation at the coastal site were buffered by fog and moderate temperatures. During the drought, the Santa Barbara region experienced an early onset of the dry season in midMarch instead of April, resulting in premature senescence of grasses by mid-April. We developed a parsimonious soil moisture balance model that captures dynamic vegetation–evapotranspiration feedbacks and analyzed the links between climate, soil moisture, and vegetation greenness over several years of simulated drought conditions, exploring the impacts of plausible climate change scenarios that reflect changes to precipitation amounts, their seasonal distribution, and evaporative demand. The redistribution of precipitation over a shortened rainy season highlighted a strong coupling of evapotranspiration to incoming precipitation at the coastal site, while the lower water-holding capacity of soils at the inland site resulted in additional drainage occurring under this scenario. The loss of spring rains due to a shortening of the rainy season also revealed a greater impact on the inland site, suggesting less resilience to low moisture at a time when plant development is about to start. The results also suggest that the coastal site would suffer disproportionally from extended dry periods, effectively driving these areas into more extreme drought than previously seen. These sensitivities suggest potential future increases in the risk of wildfires under climate change, as well as increased grassland ecosystem vulnerability.