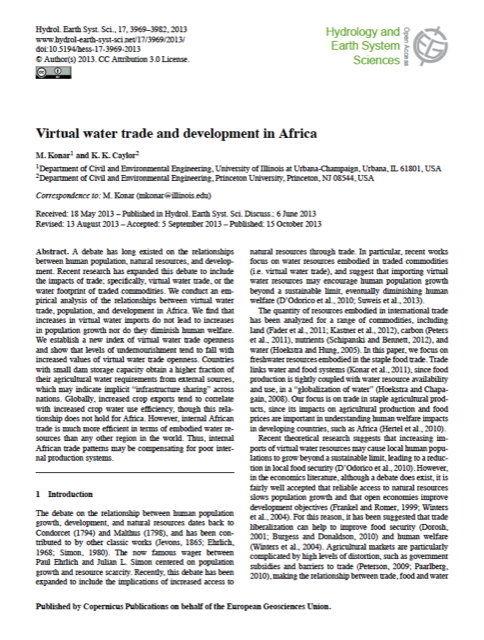 A debate has long existed on the relationships between human population, natural resources, and development. Recent research has expanded this debate to include the impacts of trade; specifically, virtual water trade, or the water footprint of traded commodities. We conduct an empirical analysis of the relationships between virtual water trade, population, and development in Africa. We find that increases in virtual water imports do not lead to increases in population growth nor do they diminish human welfare. We establish a new index of virtual water trade openness and show that levels of undernourishment tend to fall with increased values of virtual water trade openness. Countries with small dam storage capacity obtain a higher fraction of their agricultural water requirements from external sources, which may indicate implicit “infrastructure sharing” across nations. Globally, increased crop exports tend to correlate with increased crop water use efficiency, though this relationship does not hold for Africa. However, internal African trade is much more efficient in terms of embodied water resources than any other region in the world. Thus, internal African trade patterns may be compensating for poor internal production systems.