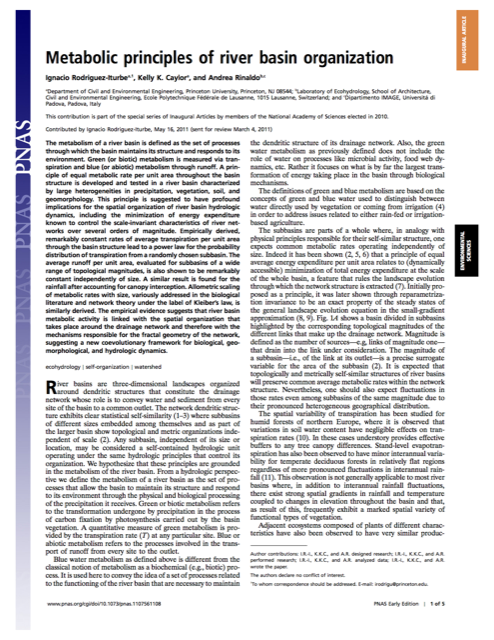 The metabolism of a river basin is defined as the set of processes through which the basin maintains its structure and responds to its environment. Green (or biotic) metabolism is measured via transpiration and blue (or abiotic) metabolism through runoff. A principle of equal metabolic rate per unit area throughout the basin structure is developed and tested in a river basin characterized by large heterogeneities in precipitation, vegetation, soil, and geomorphology. This principle is suggested to have profound implications for the spatial organization of river basin hydrologic dynamics, including the minimization of energy expenditure known to control the scale-invariant characteristics of river networks over several orders of magnitude. Empirically derived, remarkably constant rates of average transpiration per unit area through the basin structure lead to a power law for the probability distribution of transpiration from a randomly chosen subbasin. The average runoff per unit area, evaluated for subbasins of a wide range of topological magnitudes, is also shown to be remarkably constant independently of size. A similar result is found for the rainfall after accounting for canopy interception. Allometric scaling of metabolic rates with size, variously addressed in the biological literature and network theory under the label of Kleiber’s law, is similarly derived. The empirical evidence suggests that river basin metabolic activity is linked with the spatial organization that takes place around the drainage network and therefore with the mechanisms responsible for the fractal geometry of the network, suggesting a new coevolutionary framework for biological, geomorphological, and hydrologic dynamics.