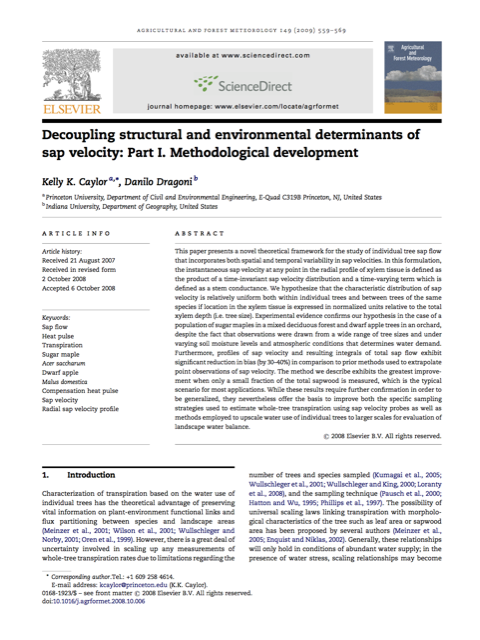 This paper presents a novel theoretical framework for the study of individual tree sap flow that incorporates both spatial and temporal variability in sap velocities. In this formulation, the instantaneous sap velocity at any point in the radial profile of xylem tissue is defined as the product of a time-invariant sap velocity distribution and a time-varying term which is defined as a stem conductance. We hypothesize that the characteristic distribution of sap velocity is relatively uniform both within individual trees and between trees of the same species if location in the xylem tissue is expressed in normalized units relative to the total xylem depth (i.e. tree size). Experimental evidence confirms our hypothesis in the case of a population of sugar maples in a mixed deciduous forest and dwarf apple trees in an orchard, despite the fact that observations were drawn from a wide range of tree sizes and under varying soil moisture levels and atmospheric conditions that determines water demand. Furthermore, profiles of sap velocity and resulting integrals of total sap flow exhibit significant reduction in bias (by 30–40%) in comparison to prior methods used to extrapolate point observations of sap velocity. The method we describe exhibits the greatest improvement when only a small fraction of the total sapwood is measured, which is the typical scenario for most applications. While these results require further confirmation in order to be generalized, they nevertheless offer the basis to improve both the specific sampling strategies used to estimate whole-tree transpiration using sap velocity probes as well as methods employed to upscale water use of individual trees to larger scales for evaluation of landscape water balance.