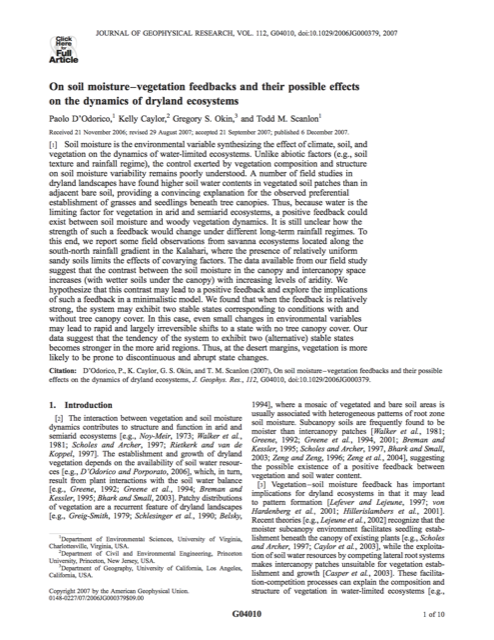 Soil moisture is the environmental variable synthesizing the effect of climate, soil, and vegetation on the dynamics of water-limited ecosystems. Unlike abiotic factors (e.g., soil texture and rainfall regime), the control exerted by vegetation composition and structure on soil moisture variability remains poorly understood. A number of field studies in dryland landscapes have found higher soil water contents in vegetated soil patches than in adjacent bare soil, providing a convincing explanation for the observed preferential establishment of grasses and seedlings beneath tree canopies. Thus, because water is the limiting factor for vegetation in arid and semiarid ecosystems, a positive feedback could exist between soil moisture and woody vegetation dynamics. It is still unclear how the strength of such a feedback would change under different long-term rainfall regimes. To this end, we report some field observations from savanna ecosystems located along the south-north rainfall gradient in the Kalahari, where the presence of relatively uniform sandy soils limits the effects of covarying factors.

The data available from our field study suggest that the contrast between the soil moisture in the canopy and intercanopy space increases (with wetter soils under the canopy) with increasing levels of aridity. We hypothesize that this contrast may lead to a positive feedback and explore the implications of such a feedback in a minimalistic model. We found that when the feedback is relatively strong, the system may exhibit two stable states corresponding to conditions with and without tree canopy cover. In this case, even small changes in environmental variables may lead to rapid and largely irreversible shifts to a state with no tree canopy cover. Our data suggest that the tendency of the system to exhibit two (alternative) stable states becomes stronger in the more arid regions. Thus, at the desert margins, vegetation is more likely to be prone to discontinuous and abrupt state changes.