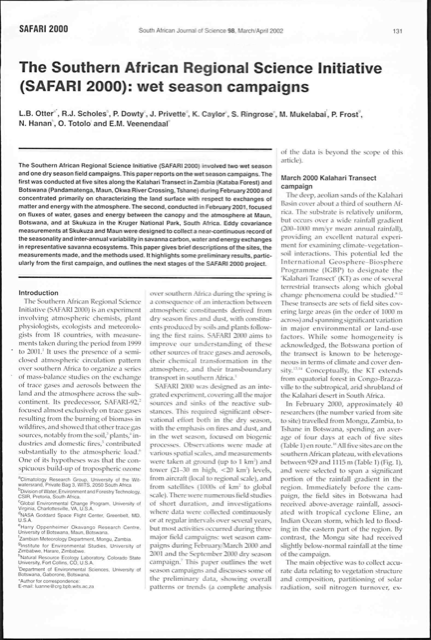 The Southern African Regional Science Initiative (SAFARI 2000) involved two wet season and one dry season field campaigns. This paper reports on the wet season campaigns. The first was conducted at five sites along the Kalahari Transect in Zambia (Kataba Forest) and Botswana (Pandamatenga, Maun, Okwa River Crossing, Tshane) during February 2000 and concentrated primarily on characterizing the land surface with respect to exchanges of matter and energy with the atmosphere. The second, conducted in February 2001, focused on fluxes of water, gases and energy between the canopy and the atmosphere at Maun, Botswana, and at Skukuza in the Kruger National Park, South Africa. Eddy covariance measurements at Skukuza and Maun were designed to collect a near-continuous record of the seasonality and inter-annual variability in savanna carbon, water and energy exchanges in representative savanna ecosystems. This paper gives brief descriptions of the sites, the measurements made, and the methods used. It highlights some preliminary results, particularly from the first campaign, and outlines the next stages of the SAFARI 2000 project.